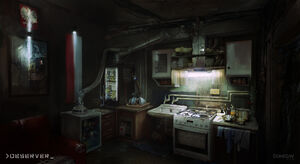 A typical apartment in the Republic, with the White-Red national flag and coat of arms prominently displayed.

The Fifth Polish Republic is a corporate-governed state in Eastern Europe (formerly Central Europe). It borders the Western-European Confederacy to the South-West and the Eastern Wastes to the South-East. It was established in 2059, following The Great Decimation.

With an estimated population of 62 million, the country's political system has been described as a disciplinarian democracy with a strictly enforced social class system. The country's ruling body, Chiron Incorporated, is led by the Chairman and the National Board of Directors.

Since the introduction of the Grand Isolation doctrine of 2060, the Republic has had limited connections to the outside world. It continues its trade relations with the Western-European Confederacy and the North American Territories, but enforces a strict immigration policy.

Although the country struggles with some internal issues, such as limited resources and a growing social-economic gap, it maintains a strong position in geopolitics. Following the construction of the Wall on its South-Eastern border, the Republic has been widely regarded as a crucial European outpost, protecting its far reaches from wasteland incursions.

The social structure of the Fifth Polish Republic is based on a strict class system. Upon birth, each citizen is registered and assigned one of three possible classes - A, B, or C.

Class A citizens are permitted to settle and work in all municipal areas, although they are generally advised not to leave their prescribed A districts for security reasons. Their neural implants are equipped with advanced security protocols and the data contained within is protected under the Sensitive Information Act of 2061. A law enforcement officer may not detain, or demand identification from, a class A citizen without their express permission, or a direct order issued by the National Board of Directors.

Class B citizens are permitted to settle and work in class B and C districts. Access to class A districts can be obtained for employment and administration purposes. Class B neural implants are equipped with standard security protocols, accessible to law enforcement agencies, Observers still require the subject to approve without a warrant. Although they are not legally required to hold a work permit, prolonged periods of unemployment, or acts of social misconduct can result in degradation to class C citizenship.

Class C citizens are not permitted to live outside their prescribed districts and can only access class B districts upon presenting a municipal visa and a valid work permit. Class C citizens are not allowed to access class A districts under any circumstances. Their citizenship status and personal data are stored within their neural implants and can be accessed at all times by law enforcement agencies, Observers still require the subject to approve without a warrant.

Based on the 2082 census, class C citizens comprise approximately 91.6% of the country's population.