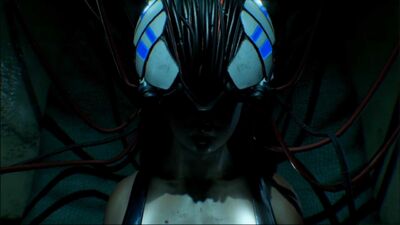 The Observers are an elite police force who are key to the story of Observer.

"Here he comes, you better beware,


A ticking time bomb, a walking nightmare,
He'll eat your dreams, he'll suck you dry,
The leech is here, it's too late to hide."

Observers are a special police unit tasked with conducting neural interrogations using the DR-3AT implant. The device, colloquially known as the Dream Eater, allows an Observer to connect to the subject's cerebral cortex via their neural implant in order to extract information. Due to the controversial nature of their work, as well as frequent cases of mental instability, Observers are generally frowned upon by the public at large.

"Yeah, I remember 'the head'. He's hard to forget. The stench of disinfectants, the screeching noise he made as they wheeled him in... The worst thing was the eyes, all lidless and bloodshot, constantly moving about. I saw grown men, hardened veterans, piss themselves when he fixed his gaze on them... Hell, I might have been one of them."
Thaddeus Berg, "Here Comes a Big One, or How I Survived the Eastern Front"

The Observer program was introduced during The Great Decimation, as a means to extract information from prisoners of war. The first prototype of the Dream Eater device was designed in 2053. The original augmentation was based on experimental technology, which proved defective and prone to a number of tragic side effects, including a drastically reduced lifespan and extreme mental instability. Perhaps unsurprisingly, the original Observers were recruited mostly among severely wounded soldiers, frequently ones who could no longer function without the aid of cybernetics. As long as their brain retained all of its functions, they could be inducted into the Observer program, thus prolonging their life and service. Arguably the most famous Observer from that time was Thomas Lipinski - a young soldier inducted into the program after losing all of his limbs to a P-92 mine.

Although cybernetic prostheses were already available, Lipinski's body rejected any attempts at implantation. Thus, what was left of his torso and head was mounted on a specially designed rack and wheeled in when it was necessary to interrogate captured enemy soldiers.

It is often said that the name 'observer' originated from Lipinski, as the fellow soldiers often referred to him - rather crudely - as a 'head on a stick' that could no longer do anything but observe the world around him. This, however, has been denied by the lead engineer of the program, who stated that the name was given in the early testing phase.

Following the signing of the Ostrovian Treaty, Observers were introduced into civil service. Reestablished as a special task force, they were now meant to act as a police support unit, conducting neural interrogations on witnesses and suspects.

The corporate-funded outfit proved especially useful in bringing down insurgent groups, which earned Observers the reputation of Chiron's leash dogs. The pejorative term 'leech' received wide circulation soon after and is used to this day, mostly among class C citizens.

"When I entered the room, he didn't even acknowledge my presence. I could tell he was past menial human interaction. Past... most things in general. I remember asking, not really expecting an answer: 'So, why'd you do it?' I had to keep myself from flinching when he turned his head and looked me right in the eye. Then he spoke, in a disturbingly calm voice. He said: 'I just wanted some company'."
Sgt. Florian Kubiak on his interrogation of the Royal Plaza Killer

While some development has been made in reducing the side effects of the Dream Eater (i.e. prolonging the average term of service from four to twenty years), the use of the device still takes a heavy toll on an individual's mind. Delving into the memories of others puts the Observer under tremendous strain, resulting in a gradual loss of faculties and a host of mental disorders.

For several years it was thought that software safeguards and proper medication could suppress these side effects. That perception changed on June 24, 2076, when a delirious Observer opened fire in a crowded shopping center, killing at least a dozen civilians. This grievous incident became known as The Royal Plaza Massacre. Following the events of the massacre, acting under immense social pressure, the National Board of Directors introduced the Disarmament Act, officially banning Observers from carrying firearms. The act was signed by Chairman Opolski on September 5 of the same year.

Despite their privileged position within law enforcement and a high success rate of the neural interrogation procedure, the public perception of Observers remains negative. Even after the Disarmament Act, incidents involving 'strained' Observers continued to occur and furthered their public image of 'walking time bombs'.

Following a particularly grisly incident, during which an Observer used his authority to get inside a B class apartment and then proceeded to murder the entire family, strict monitoring procedures and regulations were introduced. One of the new regulations required an Observer to obtain the subject's consent prior to the interrogation, unless a valid warrant has been issued.