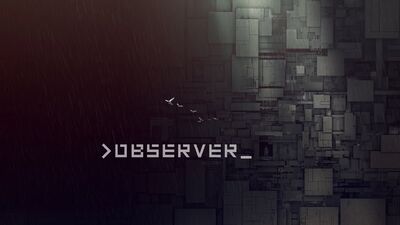 Observer is a new game from Bloober Team, the developers of Layers of Fear. It is published by Aspyr. Stylized as ">Observer_", the game was first teased during E3 during the 2016 PC Gaming Show. Developer Rafal Basaj has stated that in Observer, you will play as a member of a special elite police unit that can hack into minds and interact with memories within. The gameplay footage shown at the PC Gaming Show displayed holograms, cyberpunk wiring, and how agents plug into the mind of the unconscious subject.

Observer: System Redux is a remastered version of Observer including an extra chapter. It was released on the Xbox Series X and Steam on November 10, 2020 and on PlayStation 5 on November 12, 2020.